Fr. Ben was born February 1, 1956, and ordained a priest on June 2, 1995. Since then he has served the parishes and missions of St. Mary in Norway, St. Barbara in Vulcan, St. Stanislaus Kostka in Goetzville, Our Lady of the Snows in Hessel, Sacred Heart in DeTour, St. Florence on Drummond Island, and St. Louis the King in Harvey. And on July 1, 2014, Fr. Ben became the new pastor of St. Francis de Sales Parish.

When Fr. Ben was fresh from graduate studies in Canon Law at St. Paul University in Ottawa, he took over as adjunct judicial vicar of the Diocesan Marriage Tribunal. He has also served as an advocate for the Diocesan Tribunal, Dean of the Sault Ste. Marie Deanery and the Marquette Deanery, and as a member of the Diocesan Priests Personnel Board.

He was appointed to the Michigan State Police Chaplain Corps in 1996. Prior to entering the seminary, he worked in the law enforcement and criminal justice fields. He is also a volunteer fire fighter. 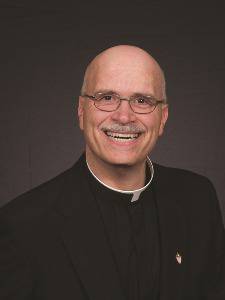